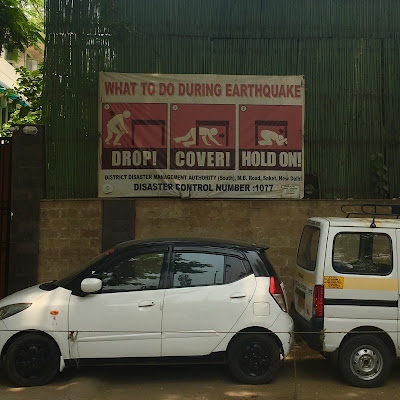 It looked like a government school
Or a graveyard,
I couldn't make up my mind which,
Sometimes,
They seemed like the same to me
Both had bodies,
In one they were still alive!

I was moved,
To memories of devastating earthquakes
Where children
Were trained, carefully, to take
shelter under their desks,
and so Died
A horrible death, for an education
Of little meaning!


Even
The simplest task
To save their lives was taught wrong!
All the song
And dance around alphabets and numbers come to naught.

This sudden thought,
came flooding back!
I can hear
In my head the dull tune
of their Learing by rote,
(It sticks in my throat)
The repeating of meaningless words
To quote,
As if the repeating would suddenly change
The fate of from where it is they came!
Another quake is all it will take
To take their future in its wake.

To me,
It looks like graveyard, they call it school
I suppose they know, they make the rule

*this piece was born as i recalled the haunting description of the many deaths of school children in the last earthquake of Afghanistan, a few years ago, while i was on a plane to Delhi on the 20th night, in the air, with a twitter feed that informed me of another earthquake of 6.3 in the region which also carried a mention of Delhi. I was mid air when i scrolled through my phone and saw this update. It was a eerie feeling, and the in ability to get information broke me into a sweat.

It was written while travelling to Lucknow, on the 24th.

A few months ago, while in Uttarakhand, i had walked into a lonely, and desolate government school campus and wondered what the children might be learning here, and what was the education they were getting preparing them for.

This poem is fictitious, but asks both those questions.

On a more serious note i am appalled that the signboard outside of this school opposite the Saket metro station, it is quite clear why i hope.