Of Informality and Opportunity, and cities in Post-Colonial Hangovers. 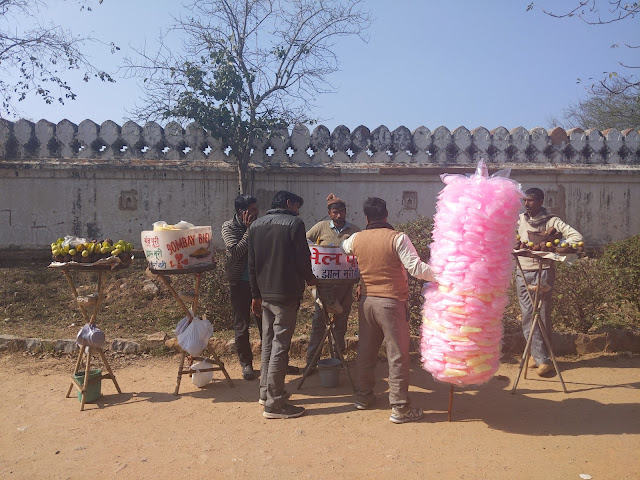 Vendors at the Mehrauli Archeological Park, on a weekend

I moved to Mehrauli in 2010, this was back when i think the metro had maybe 3 lines and an Airport line from the New Delhi Station.

It struck me as odd, back then, that the metro station for Mehrauli was over a a kilometer of a walk from the outer edge of Mehrauli and possibly another kilometre from dead centre. More interesting was the fact that elsewhere, whereever it was needed to cross a busy thoroughfare a Foot Over Bridge (FOB) was integrated into the design of the station. This was not so in Mehrauli - the Metro Station is on the other side of a National Highway designated road, and a pedestrian crossing with a largely non-functional red-light was the only way to cross until, 2018.

Yes, 16 years after the metro services started in Delhi.

But that is not why i sat down to write this, the issue is bigger than a station and the lack of a pedestrian bridge.

It goes back to a few days ago, riding in the back of a cab from a site visit, those special occasions, when i get to observe what is on the side of the road, the edges, the changes of the city scape.

It also connects, a little unexpectedly, to a walk in the Mehrauli Archeological Park, where i regularly walk my three fur children, where i crossed a group of vendors, and another time chanced to overhear a conversation of one the security guards with seller of Ram-laddu, telling him how it was not allowed for vendors to sell their wares in the park, and how he could impound his things.

What was interesting, was that immediately after this conversation on the possibility of impounding, and the illegality of the selling, the security guard asked the vendor to serve him a plate of those Ram-laddus, and then paid him the 20 rupees that was the regular price of a small plate.

Immediately a few thoughts flew through my head -

The first, that the guard actually paid the vendor, he didn’t even suggest they be given free, or negotiate a price or anything. There was no demand for free service in exchange for allowance of passage.

A second, that there are possibly lacs of people who come to their city in search of a better life and better earning opportunities, who work and exist in an informality that provides much needed services to the city at prices that keep them both affordable and relevant.

And the third, and possibly most important, that Policy may not register this, but even the enforcers of policy, and the public at large understand that there is a need for them and without such people and the varied services they provide, our city and many of privileges we enjoy would not be possible.

The city is an economic entity, there is little that can be said to refute that. The nonsense around art and culture etc doesn’t really apply to a vast majority of the people in the cities we live in. One could argue that geographically, less than 5% of the city is actually given to these functions, and accessed by an even smaller percentage of cityzen.

In our post colonial reality, the city remains an opportunity, for better - education, pay, standard of living, employment and possibly an escape from caste / and employment structures that are very limited in the reaches of rural India.

The city is lorded over by policy makes, bureaucrats, politicians and lawmakers, who ricochet between their various bastions of power in high fancy cars, with a battery of sycophants , support staff, servants and security detail. You won’t seem them step down on the sidewalks, or for that matter use a bus stop or board the metro. Our notions of achievement, development, and progress are hung over from the days of the Raj and an internalised Imperialist aspiration.

Again this thought is not what sparked the idea of this piece. I was riding back in a cab from site crossing the many stations of the just completed Magenta Line, the most recent of the DMRC’s additions to the vast network on Metro that has done wonders to change mobility and the city scape ( of course there are really stupid ideas like the TOD floating around, but we shall not digress) and as i passed each station, i was surprised by the number of sellers, crowding the alighting points - water and nimbu-pani, sellers of cigarettes, boiled eggs and bread-omelette sellers, momos, mobile screen protectors, and parathas, the list gets longer and more interesting at some stations with chow mien carts, chaat, chole-kulche, and litti-chokha. 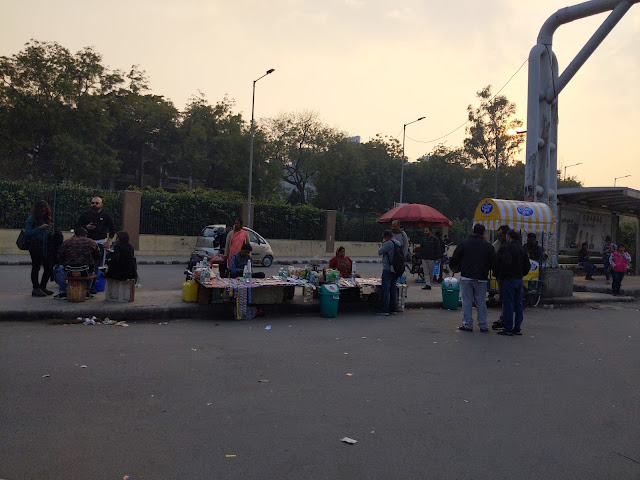 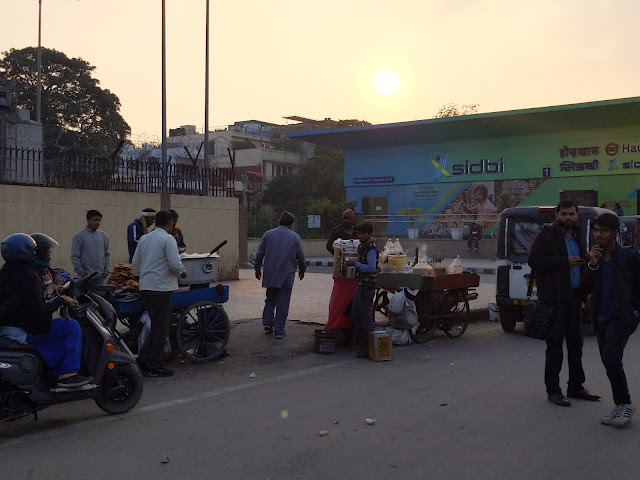 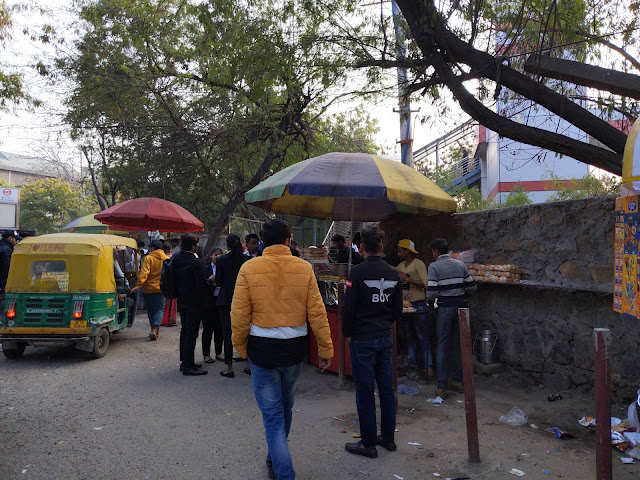 It also strikes me as odd, that the metro stations, where you could easily have an end to end commute in the region of 90 minutes or more, are devoid of water fountains, have negligible restroom facilities (that are invariably outside if the exit gates, requiring you swipe your card or drop your token to access them, which is even more inconvenient if the station is not your destination station and you are using a token).

So while the network is a transportation boon, in its now 16 years of growth and development, it has sadly remained just that - a conduit for the transport of people across the city.

The Metro has failed to recognise its own agency, and its own transformative potential. it has  now become the venue for dates, for meetings, and is slowly, but without any design intent, morphing into a quasi-social infrastructure out of sheer need. And it surprises me how these aspects have been completely blindsided. I could accept that the first time around when the station at Kashmere Gate opened, with the inclusion of a McDonalds, and some other fast food places, there could have been a lack of clarity.

But 16 years down the line the omissions are disappointing,(possibly deliberate), point towards an intellectual laziness, and represent a huge opportunity that is lost. One would have expected to see last mile connectivity, street food and vends, and social activity transforming the landscape around the interface of the metro stations with the city they are an intrinsic part of.

The way things stand even now, one can see the design and thus also the intent behind the design is opposed to such a possibility. A stance that comes from, and i conjecture here, policy makers who themselves do not use the metro and deem it to be for the “working class.” Or from a deep rooted class divide, that recognises cultural activity, social exchange, and food to be of value to only a certain economically advantaged section of the city that would not engage in such at “transport infrastructure”. It would be too pedestrian (pun intended!)

One must recognise informality, in its many avatars as both economically necessary and infrastructurally vital to the existence of the city. Informality posses an ability to organically grow and change to suit demand, space, season (and climate)and ever-changing taste and so possess a quality that is unmatchable by the more formal and much more resource intensive models of commercial and consumer enterprise the economic powers that control the city wish to encourage. There is a certain dynamic property that guides the informal, that cannot be replicated by the large corporate, multinational / big brand business entities.

While it is encouraging to see a Cafe Coffee Day and Wow momos, or Burger King at metro stations, or kiosks selling bottle water and drinks, it is also necessary to address a changing usage pattern and the needs of a far larger population that drives the metro and keeps it viable. A population who's needs if recognised and integrated into the wider plans of the city and its infrastructure, we should have a safer, more seamless and more pleasurable public space.

It is time we recognised that transport and infrastructure will be the New Democratic spaces of the city, and i could argue, its future monuments. Mobility, and the access to information and digital communication have altered the way we use and interact with the city. But design and design practitioners, especially architects, planners, policy makers and the government have yet to acknowledge it.

I see in the metro and how it interfaces with the city of Delhi as a massive, untapped opportunity - financial, cultural and social, that could multiply the already large impact the metro has had on the lives of all city folk, working, retired, young, old, disabled or otherwise.

Yet when i see the latest of the metro stations to be opened, one cant help but be sad,
that our cities, and how they continue to be designed by architects, and visioned by policy makers, and governed by administration, do not not account for the home-grown, for the small enterprise, for the spontaneous, for signs of hope - do not account for the huge possibility that is the informal.

That the city and its infrastructure is still being designed with a colonial Sahab’s gaze, that lives in a nostalgia of being driven around New Delhi in the back seat of imported car, with a saluting driver, who handles the steering wheel with white gloves. Who’s idea of the city is a sanitised, inch perfect, picturesque and poor-free space.

Not only would that be undemocratic, but it would also be absolutely unsustainable in every aspect - energy consumption, urban services, last mile connectivity, domestic services, food, the list just goes on. It is tiresome to see the same mistakes  and same assumptions being repeated again and again. Opportunities for livelihood and ownership of the public space are not only for the rich, and the economically advantaged. Our cities need to be reimagined, our cities need to be designed by people who live, eat, work and most importantly WALK in them (and use its public transport systems!)