This came in on my email form the Economic Times.

An invite to ACE Tech 2013, a trade fair pegged as the biggest fair in Asia for the building industry. 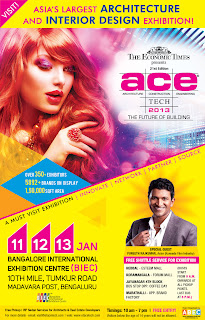 What part of this has to do with architecture, the building trade or engineering i do not know. And i wonder if anyone reading this could enlighten me on the connection. What a red haired, pouting damsel has to do with any professional discourse or exchange in the construction industry is way beyond my imagination.

To me this is titillation, cheap and low and completely unbecoming of a newspaper of this stature. Also I find it insulting, and derogatory of the profession of architecture and the allied professions of the building sector. And derogatory of women and very poor indicator the newspapers view of women.

It is sad to see the moral vacuum that allows the press to let such work pass under its banner. It is also alarming to realise that this is the level of intellectualism ( lack of) that the news paper assumes of Architects and other professionals in the building design industry.

I am saddened, astonished, aghast, disturbed and at the same time violently angry at such publications that reflect so poorly and paint us professionals in such an undignifeid and low light.

Is there no discourse? No agenda, no technological discussion that would be meaningful to architects and engineers and product manufacturers alike that could have been used for publicity.

And in the aftermath of the recent happenings in Delhi and elsewhere, and the massive uproar for greater respect and protection of women I feel ashamed that a reputed national daily should so willingly and shamefully resort to such misogynist adverstising.

I have written to the ET, but have not received a response yet.

This here is a record of my utter disgust and disappointment at receiving such an email.

IF IT WORKS YOU SHOULD BE GRATEFUL

So, I was taking a cab, to Brijvasan today, on the expressway - an organised network of flyovers, and to my right is the Airport Metro Line.

The shining icon of modern infrastructure in resurgent India it has now been lying unused since July 2012. Built at a cost of 5700,00,00,000 rupees and operated for exactly 18 months. There is no telling if it will operate again. There is no telling if there is any intention of making it operable again. The news periodically informs us that the deadlines for re-instatement of services will not be met (again), in a now accepted pattern of delays.

It is also widely rumoured that the technical aspect is is just a cover-up, the agency that runs the line found the operation running into huge losses and thus decided to shut it down!

What happened to the commonwealth games projects, and housing, that were ( if you use a slightly skewed logic) quite intentionally not finished on time(And built at what the Business today estimated at 60,000,00,00,000 rupees)?

Leads me to wonder how it is that we think and ponder our many maneuvers and actions in the creation of the Urbanity of India. And only one idea comes to mind

What  can we get away with?

That is probably the question that defines our thinking.

When we drive, in the cities chaotic traffic, and the big car overtakes from the left of a bus, right in from of a bus stop.  Or the Auto swerves without warning making you jam on your brakes

Or the biker, and driver who stops a few paces ahead of the red-light, ahead of the zebra crossing. Or the jay walker, who will cross the road willy-nilly, arm up in the air, with no concern for life or death, on the long stretch of national highway.

Take for instance the posh locales of Greater Kailash or Green Park, where there are more cars possibly than there are people. And everybody parks on the pavement that was essentially made for walking.

Or take Khan Market, where there is barely a pavement to speak of, the inner lane is mess of broken pavement, putrid odours and air-conditioner compressors blowing hot hair.

Take Cannought Place, that has systematically been dug up, laid back and re-dug  so many times in the last five years that it is almost un-navigable, and largely left to its ways by most people.

Or take Defence Colony market, or the market in at GK1 M block, where the high and mighty of South Delhi’s  it brigade flaunt their cars, their bling, and fortune.  Where pavements are too narrow to walk, honking cars jam the narrow lane that has other cars parked on one side but the shoppers association refused to pedestrianise.

Take the large and iconic under and  over pass at AIIMS crossing, that was designed without a pedestrian way linking across it to the two hospitals, the  government housing and Dilli Haat.

Take DDA housing, with its Rolled steel windows, its falling apart concrete and plaster, and complete lack of parking and play spaces. And the fearful mess right outside the RWA gate, that you feel scared to venture into.

Take the builder apartments where the top floor has a ceiling height 9 feet or less so that the builder can squeeze in one more floor in the height restrictions that the bye laws prescribe.

Take the shoddy workmanship of the fly-overs in delhi where you bounce on what should be a plane surface and are jolted every time you cross an expansion joint.

Or for that matter the huge ditch that is left in the road after the telephone department  has dug it upto lay a cable.

Or take your academic work or submissions that are usually a “page 1” cut copy paste from a google search.

Or take for instance the garbage that plastic wrapper of the packet of chips you casually chuck out of your window in a bus or in  car on the roads of your city.

Or the random and wonton peeing on roadsides.

Take for instance the lack of toilets in public parks.

The list goes on. But what made me think of it most was the Airport Express Metro Line, a collosal spend of public monies, lying there unused, wasted, and possibly unusable. So whoever it was made their money, and well, that’s pretty much the end of the tale, if it works you should be grateful is what I hear people say.

IF IT WORKS YOU SHOULD BE GRATEFUL

(enough said, if anything works you should be grateful, the point is it was put up there for some one to make money, that done, be grateful if it works! I might be a bit off but the next time you see them replacing perfectly good pavements in New Delhi area, or raising an already high boundary wall by two feet, think again! Also when the monsoons hit in august and you aren't walking in knee deep water, be grateful!)